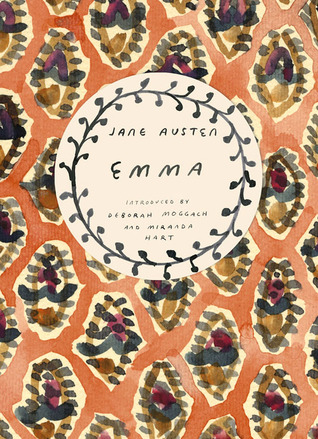 ‘Jane Austen’s Emma is her masterpiece, mixing the sparkle of her early books with a deep sensibility’ Robert McCrum, Observer

Emma is young, rich and independent. She has decided not to get married and instead spends her time organising her acquaintances’ love affairs. Her plans for the matrimonial success of her new friend Harriet, however, lead her into complications that ultimately test her own detachment from the world of romance.

.I FINISHED IT! SO many things to say…

This book for me was so difficult to get into, I’m not sure if it was for the story or the characters (though I think they had some importance) or for my life being hectic and having no time to read this as I should. However, once I was about 200 pages I got into the story and it was just a great journey. I didn’t realise this until I finished it and saw how attached I was to these characters and story.
As always with these Jane Austen stories, I read most of the book wanting the characters to be together but not until the last 20 pages or less, they were together. But, let me be honest, those pages were amazing

Emma: At the beginning she was a bearable character. I didn’t like her, she was frustrating and got into things she shouldn’t interfere. However I didn’t hate her or anything like that because she didn’t want to do anything bad, she wanted to help and find happiness for those she cared about. She didn’t mean any harm but she still was annoying. She kept being like that until she realizes her mistakes and we see a new face of her personality and one, in my opinion, that made her a great character: She accepted her mistakes as they were, big or small, she didn’t dismiss them or make them less important. She didn’t fear her mistakes and didn’t fear trying to make things right. That is something for me very important and made her a different character to what I first thought.
I also believe she had character development through the book, she learns to not interfere maybe to be more patient and how one action can have different consequences.
In the end she wasn’t a perfect character but she was quite real, she had her bad and good things, mistakes, and she didn’t wish any harm to anyone.

Knightley: I loved him from the beginning and I believe so far *nervous* that he is my favourite male character from all the Austen novels I have read. Everytime he was in a scene I was so happy, every time he spoke or did something was great. He was very patient, honest, an amazing friend to have, observant, thoughtful, loyal and I believe he loved with all his heart.

I’m happy to say that from the beginning Emma and Knightley were my couple, I wanted them to be together so much, everytime they were together or talked for me was precious. I put a flag on every moment I considered ‘important’ for their story. And I’m so happy of how they developed their relationship. That is an slow romance I loved though they had been loving each other for years. When they realised they love was so amazing but seeing everything, how jealous they were, protective and honest with each other that was everything.

I need to talk about other characters too…
Harriet: She was very good and innocent but I didn’t like that she followed Emma, everywhere she went, what she said and opinions. That was what made me not like her that much.
I was sad she didn’t marry Robert Martin from the beginning because that seemed like a beautiful story and love, he seemed to be a great man. So, I was really happy with their happy ending, one they deserved.

Frank: He seemed like a good option for marriage and I didn’t suspect anything of his story with Jane until Knightley mentioned. Still, I wasn’t sure if it was true but it was and it was great. He had such a beautiful love story with Jane, definitely not easy but beautiful anyway. He was funny and young, played and made jokes, I imagine he would be a funny friend to have. I really liked him.
Jane: I didn’t change my mind about her until the end, I didn’t like her but then you learn her situation and learn to like her. I’m sorry for all that happened to her and seeing Frank with Emma must have been difficult but at the end she had a great ending.
I’m really happy with these two and they marriage.

The Weston couple was so beautiful to read, they loved each other and cared for their friends a lot. They meant to do good though they didn’t ‘build’ the couple they wanted. They definitely had a happy ending and their future must have been great.

Elton: I liked him until we learn how he really was. Then I didn’t like him at all, he was selfish and arrogant. And his wife was insufferable, I hated reading her, trying to have everyone’s attention, and being an arrogant stupid one.

Mr Woodhouse: I didn’t like him. He only cared about health and because of his illness he excused that he couldn’t be ‘social’, everything had to be on his terms and in his house. He also needed to have constant attention from someone. And one of the things I disliked the most was that he called ‘poor Isabella’ or Miss Taylor when they had happy marriages just because they had their life away from him. They had a life and because of that he supposed they were unhappy when the truth was quite opposite.

Miss Bates: I feel like I have to talk about her because I hated reading her monologues, just one page she talked, alone, it was hard to read. But still, she didn’t mean any harm, she wanted everyone to be happy and live. So I liked her for that.

This story was fun sometimes, embarrasing others, had many suspicions and imagination had a big role. Couples that people planned and ended up being nothing but at the end everyone found their happy ending.

“One half of the world cannot understand the pleasures of the other.”

“There are people, who the more you do for them, the less they will do for themselves.”

“You must be the best judge of your own happiness.”

“It’s such a happiness when good people get together.”

4 respuestas a “A book I loved more after finishing it than while I was reading it | Review: Emma by Jane Austen”