I recently discovered this mini-tv show called And Then There Were None based in Agatha Christie’s book with the same name.

What got my interest first? The poster: 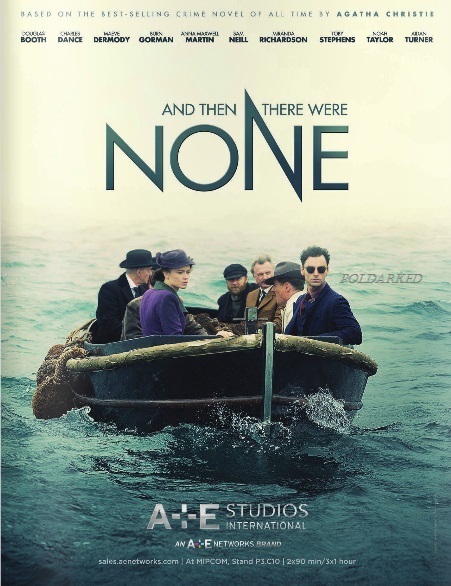 I didn’t know this was based in a book until I started watchig the first ep. I didn’t know it had three episodes until I started to search more about this. Each episode lasts one hour. This could be perfect for a suspense night, or maybe you can see one episode per day. It’s easy to watch and really really great.

And a little clip:

The second thing I noticed (after I found that was absed in a book) was that Aidan Turner was in this. I saw Aidan in City of Bones but I gave him no second look. Then I saw him in Poldark and I was like ‘Oh,hello there.’ But in here…people…now I love him. He is soo handsome and he is a bad guy and that was soo hot. I loved him. He was my fav character because he was bad, he knew it and accepted it from the first moment.

I haven’t read the book and that might be a good thing or not I don’t know. What I know is that I loved watching each episode. Everything that happens was really unexpected. The plot was unexpected. And the end! I was in shock with the end.

The actors were amazing. You doubt of each character at some point and I wasn’t sure about any of them. You were haunted too and that gave the creepy feeling. Suspense all time. You get to know their dark past through the episodes and why they are there.

“Ten . . .”
Ten strangers are lured to an isolated island mansion off the Devon coast by a mysterious “U.N. Owen.”

“Nine . . .”
At dinner a recorded message accuses each of them in turn of having a guilty secret, and by the end of the night one of the guests is dead.

“Eight . . .”
Stranded by a violent storm, and haunted by a nursery rhyme counting down one by one . . . one by one they begin to die.

“Seven . . .”
Who among them is the killer and will any of them survive?

I highly recommend this. It’s a short tv show full of mystery and suspense. You’ll doubt of each character until the end.

Thank you for reading! I hope you enjoyed this recommendation and reading me fangirling over this and Aidain Turner #sorrynotsorry

Let me know what you think of this mini tv show, about the book or about this adaptation. I would love to read your thoughts!

6 respuestas a “Recommendation: And Then There Were None Mini-Series/TV Show”